The Daily Mail has published an atrocious article about the actress Jenna Coleman (Victoria, Doctor Who, Emmerdale)

in which her improved attractiveness and increased social status is approvingly discussed. It is a quite remarkable and horrible read, have a look at it here

to see  how a woman’s changing looks from teenage years onwards can be dissected, sneered at and finally grudgingly approved because now she has

Well, that’s it now isn’t it, she has arrived. Dear Daily Mail, the 19th century called, it wants its writing style and attitudes back.

After briefly checking to see that this article wasn’t actually a sly rehash from some 19th century society rag with modern celebs chucked in and after reading a Twitter conversation in which a bloke claimed we can’t fight against modern ideas of what constitutes an attractive woman -slender, classy, ability to attract a Prince- it strikes me that these aren’t modern notions at all but really old and (by recent standards) exclusionary ideas of what beauty is.

This article praises Jenna for transforming herself in two ways; in her physical presence and also her class affiliation (but, wait, apparently she didn’t. We’ll deal with that in a bit) so that she is now a “classy” beauty. The whole piece is a lesson in not only tired, age-old cultural constructs around what defines female beauty but also snobbery. Jenna was not born into the upper classes, she seems to have had a fairly conventional middle-class Blackpool upbringing. Now though, according to the Mail, her regional accent has disappeared and she speaks as the properly posh do, cut glass vowels and all. Jenna has also developed a certain “froideur” which is fitting in one’s betters, presumably.

The signal being that this, along with her slender frame and subdued taste in clothes means that she is now not only gorgeous (and unattainable except for a Prince…hello fairy tale archetypes) but, oh joy, posh and therefore more fragrant and, just, better than before. It actually says “But it takes more than a well-cut dress to make a lady. One’s demeanour must also undergo a subtle change”. Why yes it does sirrah but wait until after I lace my corset and have a small faint please…

The ideal of slim, quiet (framed as ‘classy’) demurely dressed beauty is, indeed, an old one.  It screams pure doesn’t it, this characterisation? Not one to dilute the gene pool, this girl. Fit for a Prince – proper marriage material. See what I mean about it being old fashioned? Never mind that people have been actively trying to reframe the terms of reference with regard to women’s beauty so that it becomes a wider and more welcoming space.

More modern and inclusive examples of beautiful women. I know most are blonde – we have a way to go yet in all areas. 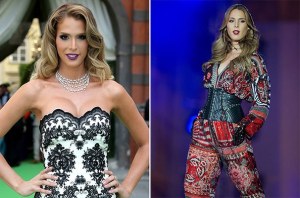 This Daily Mail writer is determined to ignore the changing conventions of beauty in favour of treading a well-worn path where the woman is a demure, passive puppet – glossy, wide eyed and young i.e . malleable, controllable and *deep breath* respectable. Let’s take a brief look at how the article reinforces past notions of non-threatening, ‘classy’ beauty shall we?

Let’s start with the descriptions of her hair. Jemma’s glossy hair would have been seen in the past as a sign of good health and therefore fertility. Past connoisseurs tended to like blonds though as this was portrayed as a visible symbol of youth.  Women tended to dye their hair to obtain the desired blonde ‘look’ They used stuff like saffron and urine or they just sat in the sun to try and lighten it. 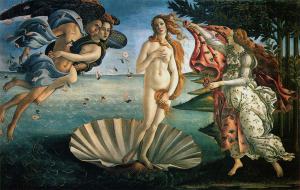 Nowadays women toddle off to the hairdressers to highlight their hair but nothing too garish please. The author of the piece stresses Jenna’s subtly highlighted hair as a marker of taste and refers to her previous “brassy” brunette style. Come to think of it, the terminology is a bit 1950s too isn’t it? Like a denizen of Coronation Street writing about that new Elsie Tanner. Perhaps it is a subtle nod to Jenna’s northern roots?

Jenna’s petite figure (as approved of by the Daily Mail) was a hit in the past too. Medieval Christianity disapproved of ‘gluttony’ which would, of course, be reflected in an overweight body. The preferred medieval figure for women was slim and youthful.  A narrow waist is consistently seen as beautiful in the literature because, of course, it is an indicator of youth and fertility. Some may be surprised to learn that smaller breasts were formerly viewed as beautiful.

This seems a long way from where we are now when large, pneumatic breasts are favoured by many (including the Mail, usually) but Jenna’s more petite frame fits into a more ancient (pre-plastic surgery) narrative of women’s beauty. As does her smooth and blemish free skin. The key word here is, of course, youthful. In the past, as today (no thanks to articles like this) the key to beauty is youth. Non-threatening, gullible, fertile, vulnerable young women – the dream of countless generations of men both young and old. But youth is not, alas, perfect all the time and may need a bit of help. Jenna’s use of makeup to enhance her looks, therefore, also follows precedent. Thomas Aquinas, when not wondering about amounts of angels on pins and so on, once turned his attention to makeup and decided that, yes, women should wear it but only to keep their husband interested and, er, not too much ladies as a too-pretty face might attract other men. Like, I don’t know, a Prince *faints*.

So Jenna probably needs to go a bit easier on the rouge in order to keep such wandering royal hands away from her and to nab the greatest prize of all – a husband.

Predictably (disappointingly) this re-invention of Jenna in the mould of standard beauty since the world began is credited to a man. Jenna’s agent is said to have overhauled her brassiness and hired someone to re-do her look. Obviously Jenna lacks the wherewithal to figure out her own clothes and makeup and needs to be prodded into poshness and, if this wasn’t explicit enough for the reader, the article ends by calling her a modern day “Eliza Doolittle”.  This godawful tripe manages to mash together decaying beauty tropes – slender, quiet and demure are not the only ways to be beautiful –  snobbery and misogyny (denying Jenna any agency in how she appears in public, ascribing unfriendly behaviours to her – a frosty encounter with Kate Garraway is invoked) into a frightful, old fashioned mess which sits oddly within a paper which appears to actively promote the very version of womanhood (fake-tanned, loud, big-haired, large-breasted) which Jenna is here set in opposition to.

Here is a woman named Billie Faiers who, according to the Daily mail was “struggling to contain her eye-popping cleavage” recently

Proof again that with tabloids like the Mail, women simply cannot win as the ladies face off versus the tramps (as ordained by the Mail) and with women (hello Natalie Clarke) writing articles like this, what chance have we got? Yes Jenna has been transformed – into a fairly ancient standard of beauty still being pushed today.